Occurring annually on the Sunday of Labor Day weekend, this festival showcases Celtic culture through a wide variety of events, including piping and drumming competitions, highland dancing, heavy sports contests and sheep dog demos. The events are capped off with a Ceilidh (translation: big Scottish party), complete with food, dancing and live entertainment.

It is said that the first Highland Games were organized in Scotland in the 11th century. During the reign of King Malcolm III of Ceann Mór (1058 – 1093), a brae o-mar (flat meadowland) along the River Dee was used in a royal contest to determine who the strongest man in the kingdom was. Competition included a foot race to the summit of Craig Choinnich, overlooking Braemar, with the winner made royal messenger. Our town of Canmore is intertwined with Malcolm and the Highland Games. The name Canmore is an anglicised version of the Gaelic Ceann Mór, which can be translated as big head, great head or chief. It’s also claimed that one of the inspirations for Baron Pierre de Coubertin, while he was planning a revival of the Olympic Games, was a Highland Games display he saw at the Paris Exhibition of 1889.

Presented by the Malcolm Scottish Society, the Canmore Highland Games at Centennial Park is one of the signature summer events of Canmore – a full day celebration of everything Celtic, including piping and drumming, highland dancing, heavy sports, sheep dog demonstrations, Celtic vendors, and traditional food and beverages, including a Beer Garden and live music in the Big Rock Festival Tent. As well, you’ll thrill to the powerful impact of pipes and drums played en masse at the grand finale of the Games events.

It’s easy for anyone to order advance ticket packages for the Games or tickets for the evening Ceilidh online through the festival website, but be quick for the Ceilidh, it’s always a sold out event.

Did you know that the Canmore Highland Games has its own tartans? Designed by local weaver, Dorothy Garen, they are woven by Fraser & Kirkbright Weaving Company and registered with the Scottish Register of Tartans. The colours represent the green forests, blue sky and waters of the Bow River, the black coal underground, the white snow-capped mountains, the fuchsia mountain wildflower and yellow for sunny Alberta.

For more information on the Canmore Highland Games visit www.canmorehighlandgames.ca.

Folk fans are going to be flocking to the Bow Valley during the first weekend of August for the 42nd annual Canmore Folk Music Festival, taking place August 3 to 5 2019 in Canmore’s downtown Centennial Park.

*To get you in the mood, below you will find information from a previous festival which will be updated as soon as new information becomes available.*

This year kids will be entertained with crafts, a climbing wall, clowns, jugglers, story tellers and much more. They are also two playgrounds located within the festival site.

Throughout Sunday and Monday on the workshop stages, magic happens regularly when musicians from around the world meld their talents and create the kind of impromptu party music of which memories are made.

The festival kicks off on the evening of Saturday August 1 where a host of musicians, including Kat Danser and bluegrass band Old Man Luedecke, will take to the main festival stage between 4.30pm and 11pm. Sunday August 2 sees daytime performances on 3 different stages from 10.30am to 4.20pm, with Blues, Soul, Celtic and Country being just a few of the genres represented. Sunday evening’s entertainment takes place from 4.30pm to 11pm on the main stage, with performances from artists such as the T. Buckley Trio, The Small Glories, and Martin Sexton. Monday’s schedule is similar with the daytime performances from 10.30am to 3.20pm on three stages and the evening concert from 3.30pm to 10pm on the main stage, where Coig, The Once, and Oysterband will perform, with Mike Farris bringing the festival to a close from 9pm to 10pm.

In addition to the live music at the main festival site, there is a host of special festival events in Canmore, including a live broadcast of CKUA’s The Celtic Show with Andy Donnelly on Friday July 31 from 6-8pm at the Canmore Civic Centre. Other events include a free kids’ concert on August 1 from 1-2pm at the Canmore Senior Centre, a youth song writing workshop, free pancake breakfast on August 3, plus the Highline Magazine Pub Stage, yet another opportunity to see live music on Saturday, Sunday and Monday from 2.15-10.45pm (9.45pm finish on Monday) at Union Hall.

Advance tickets are on sale online via TicketPro, or in person at Stonewaters in Canmore. Any remaining tickets will also be available at the gate Saturday, Sunday and Monday.

For more information about the Canmore Folk Music Festival, including the latest event calendar visit www.canmorefolkfestival.com.

The Artspeak Arts Festival in Canmore is an annual weekend event with cultural activities and performances presented by the Canadian Mountain Arts Foundation. The festival next takes place on September 25-27 2015 and most activities are free of charge. Visitors can expect to see visual arts, photographers, film makers, poets, authors, street performers, live music, an art fair, workshops and artist presentations.

*The schedule below is from a previous year’s event and will be updated for 2015 as soon as possible.*
The festival calendar outlines the schedule which kicks off on the evening of Friday June 15 with the artScene ‘booze & schmooze’ night which gives Bow Valley artists the opportunity to network over a drink with live entertainment at Creekside Hall in the Canmore Senior Centre, costing $10.
Saturday June 16 from 10am to 6pm there will be an opportunity to visit local artists in one of four themed tents celebrating Visual Artists, Media Artists, Literary Artists and Performing Artists. Also opening on Saturday is artWork 2012 Exhibit which will show collaborative work of local and visiting artists, working in different mediums. There will also be street performers providing a variety of entertainment throughout the Festival Grounds.
From 2pm to 11pm the Festival Stage will host a range of performing artists which is likely to provide a fun party atmosphere into the night.
On Sunday June 17 there will be professional development workshops and talks from visiting artists, and the festival will be brought to a close by artWord’s Literary Saloon, a celebration of Spoken Word from 7pm to 11pm at Canmore Miners Union Hall.
The artSpeak Festival Grounds can be found between 8th and 9th Streets behind the library in downtown Canmore.
To find out more about this festival, visit www.artspeakcanmore.com
For accommodation in Canmore during the festival, visit www.canmorehotels.com 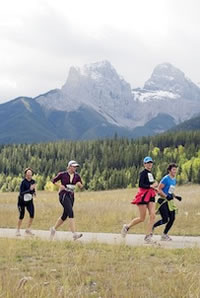 Considered one of the most beautiful runs in Alberta, the CAUSE Canada Race is routed through woodlands, beside mountain streams, through a historic mine site and stunning views of mountain scenery. The track is a combination of asphalt and high quality gravel trail with several short climbs and winding paths.

Striving to be the GREENEST race in Canada, all possible products and procedure will be eco-friendly. This includes:

All proceeds from the race will go towards women’s literacy, numeracy, and business training in Central America and Western Africa. CAUSE Canada’s Women’s Integral Empowerment Program (WIEP) is being made possible by revenues generated through partnerships with athletes like you!

This exciting annual mountain bike event involves relay teams or solo riders competing to ride as many laps as possible in a 24 hour period. This year’s event takes place on July 23 2011 at the Canmore Nordic Centre, where you can see western Canada’s top mountain bike riders race against some of the best in the world.
The most gruelling way to compete in this race is as a solo rider, which involves up to 24 hours of riding. There are also 2, 4 or 5 person teams who would split the riding between them, meaning that each member of a 2 person team would ride for up to 12 hours, members of a 4 person team could expect to ride for up to 6 hours and each member of a 5 person team would be riding for 4 to 5 hours. The 2 and 4 person teams can be any combination of men and women, and within the 5 person category there are co-ed, female only, and age related sub-categories.
It is also possible to enter a corporate team of 6 to 10 people which could allow some team members to ride for just 1.5 hours, thus opening the event to all skill levels.
24 Hours of Adrenalin has been a big hit in Canmore in recent years, and it’s well worth coming as a spectator to view the race and experience the buzz around town. As the race takes place in the middle of summer, Canmore hotels are likely to be busy during this time, so early reservations are recommended.
For more details about the event, visit the 24 Hours of Adrenalin website.
To find accommodation in Canmore for this event, visit Canmore Hotels.com.

From March 11-14 2011, the Main Steet of downtown Canmore will be transformed into a cross country ski track as part of the Canmore Ski Nationals Community Celebrations. As well as the opportunity to ski through town, there will also be lots of fun events happening throughout the weekend, as you will see in the following press release:

What town dumps 850 cubic meters of snow onto their Main Street in March, just so they can go cross country skiing? Canmore, Alberta does!

Building on the overwhelming success of community activities surrounding the 2010 World Cup last February, the folks in Canmore are up to it again with the presentation of the Canmore Ski Nationals Community Celebration 2011, March 11 – 14, to welcome the 600 + athletes who will be in Canmore for the 2011 Haywood Ski Nationals, which are the Canadian Cross Country Championships.

Presented by the Canmore Destination Marketing Fund and The Canmore Downtown Business Association in association with the Canmore Nordic Centre this year’s expanded event will once again include a ski track on two blocks of Main Street and a host of activities for all ages. These activities will include many of the popular events from last year including JackRabbit Races, Dog Sled Races, Welcoming and Awards Ceremonies, Street Hockey, Fun Races and Public Use times.

New for 2011, will be a Block Party and the availability of free ski equipment loans from Trail Sports during public ski times. Chandra Crawford’s Fast and Female team are back for their 2nd urban experience and will be hosting a Ladies’ Pink Power Ski Night with prizes for best costumes. There will also be the 1st running of the Xterra Winter Triathlon which includes a swim, a run and finishes with skiing on the Main Street Track!

For more information on this incredible and unique event, including a full event schedule please visit www.downtowncanmore.com.
Canmore is having a party and we invite you all to come to town March 11 – 14 and Be A Part of the Excitement!

The Canmore Children’s Festival Society presents WOW! It’s a kid’s fest with a TWIST. Pick the family friendly option(s) that suit your time and interests. Morning (Yellow Program), Afternoon (Red Program) or Evening (Blue Program – featuring the inventive musical comedy of Juno Award winning Al Simmons). Each offers a variety of entertainment and activities that will be sure to please 3 – 10 year olds. Music, magic, stories, crafts, exhibits and just plain silliness abound. Please be aware that there are a limited number of tickets for each program. All the action takes place indoors at Canmore Collegiate High School (1800 8th Ave., Canmore).
Visit our web site www.canmorechildrensfestival.com for details.